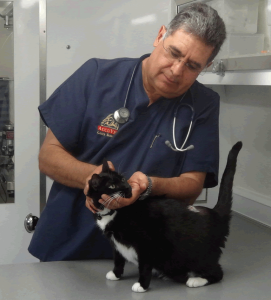 Alberto G. Gil D.V.M is a conventionally-trained veterinarian who has been practicing medicine for over 30 years in Latin America, United States, and Europe. In his constant search for knowledge, Dr. Gil was involved in extensive cattle-research Vesicular Stomatitis disease in Costa Rica. Also, worked with the Pan-American Center against foot-and-mouth disease in Rio de Janeiro, Brazil. He returned to his homeland, Mexico in the 1980’s and did research about the deficiency of vitamin E and Selenium in Sheep. He maintained a private veterinary practice in Mexico City treating horses, cattle, sheep, and small animals.

In 1991 he wrote a thesis about Equine Rhinopneumonitis. Shortly after, he immigrated to the United States to continue his veterinarian training at the The Virginia-Maryland Regional College of Veterinary Medicine, Blacksburg, Virgina. In the 1990’s he was asked to work in the clinic for small animals in Germany. After returning to the USA he became a certified chiropractor for animals. Always interested in the holistic healing art, he studied homeopathy for humans and is a graduate of the Devon School of Homeopathy, New York. At the same time he also received extensive training in veterinary homeopathic care with Dr. Richard Pitcairn.

Presently, Dr. Alberto Gil maintains a private practice for small and large animals in the metro New York and New Jersey area. His work expresses his love for animals, nature, and his vast experience with homeopathy, chiropractic, and nutritional therapy, has made him a highly respected holistic veterinarian.